I-Map Data Systems maintians a fleet of custom built drone helicopters for close range aerial photography.  We also maintain a stock of interchangeable parts that allow changes in propeller size and power modifications as needed.   Our primary custom built drone quadcopter (Model DMG 560 shown above) is registered with the Federal Aviation Administration with an FFA exemption request for commercial drone operation in the US.

Our drone photography expert is Bill Isenberger. You will find additional information about drone photogrammetry, pilot licenses, and drone registration on his photogrammetric mapping and modeling website: Digital Mapping & Graphics. 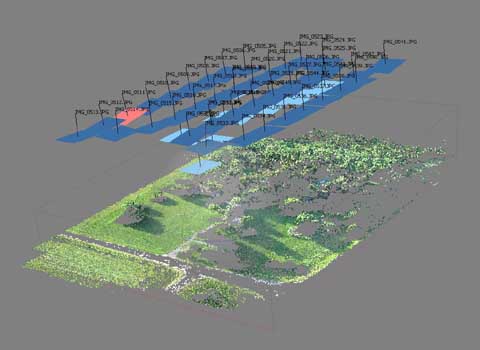 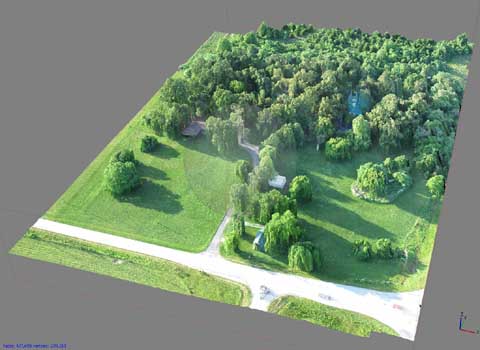 The images above show the development of a 3D model using drone photography aquired by the DMG 560 Quadcopter.

The 3D data generated by this process can be used to create raster based digital elevation models and orthorectified images.   When surveyed ground control points are used in the process, the georeferenced positional accuracy will be several centimeters.

The interface below allows 3D interactive viewing of the above surface model.   Your browser and computer graphics card must be capable of rendering with WebGL for the interactive display to be fully enabled.   A high end graphics card will provide a highly responsive full screen display.   The 3D display will also work on cell phones with high graphics capabilities.   After the model is fully loaded, you may click the full screen icon in the lower right corner of the view to go full screen.

The images below show a digital elevation model (DEM) with one foot contours and an orthophoto produced from drone photography.   The DEM shown on the lefttop is a continuous raster grid with 13 centimeter grid cells containing floating point elevation values in feet.   The DEM is derived from a 3D surface model produced from drone photography as described above.   Elevation values for the DEM are correlated to RTK GPS target points set in conjunction with the drone aerial survey.   The topographic contours are computer generated from the DEM at one foot intervals.   Contours in the trees and brush were individually deleted by inspection.

The DEM was used to orthorectify the composite aerial image shown on the rightbottom.   The photos used to generate the composite image were captured by the DMG 560 Quadcopter at an altitude of 400 feet.   The full-size orthophoto pixel resolution is 3.25 centimeters and the horizontal positional accuracy is +/- 6 centimeters. 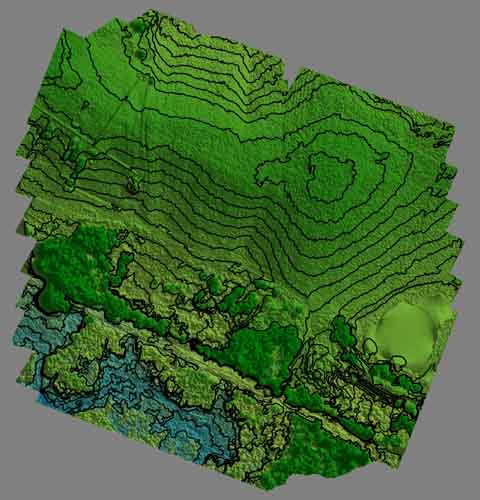 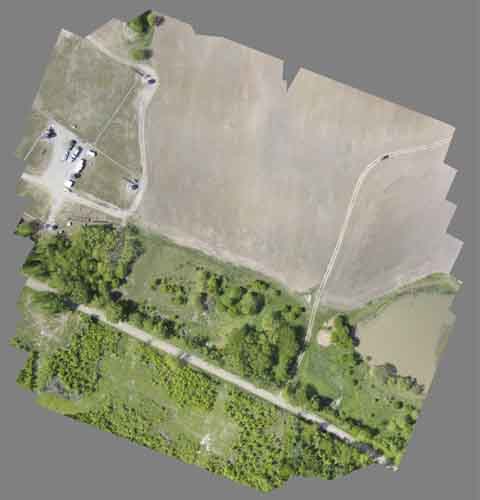 The orthophoto shows part of an oil production site where ground elevations were previously determined at well locations.   These elevations were used to check the vertical accuracy of the 3D surface model.

The image below shows well locations with ground elevations recorded to one tenth of a foot by previous conventional surveys.   Contours generated from the DEM are labeled adjacent to the well locations for easy comparison.   The contours show that the DEM values are typically within a few tenths of a foot of the measured ground elevations.   The ground surface is plowed or brushy, so this is the best accuracy that can be expected. 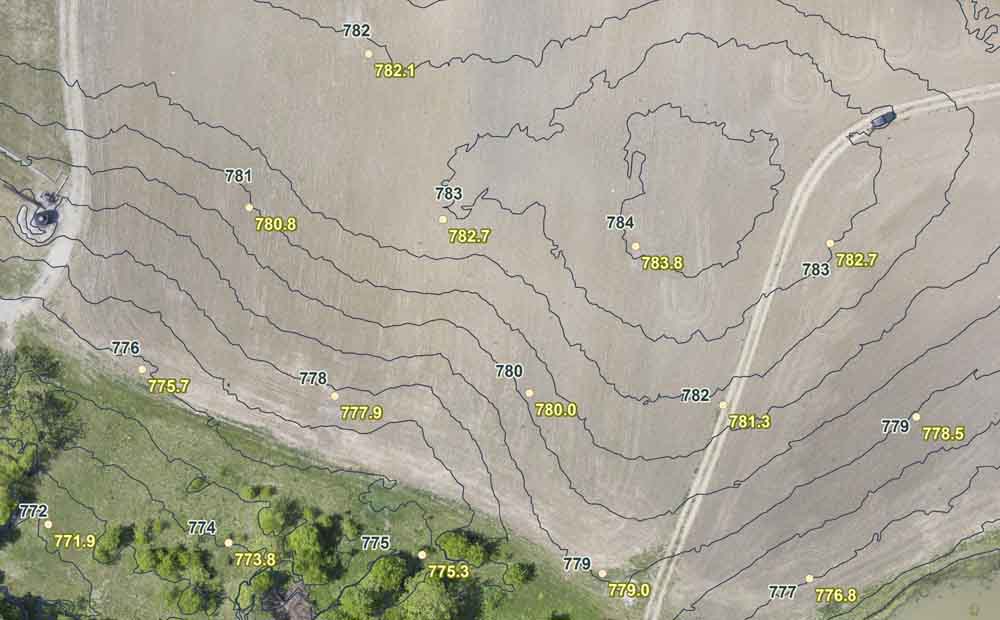 View a 3D interactive model of this site on Sketchfab.

The example above shows that close range photogrammetry can provide superior 3D site information for environmental assessments, site planning, construction engineering, and hydrologic analysis.   The high resolution DEM created by this process would be impractical to produce with conventional surveying.   The resulting orthorectified and geo-referenced high resolution imagery allows precise measurements of site features to be made without additional survey measurements.

The image below illustrates gas line measurements made from the oil field orthophoto. 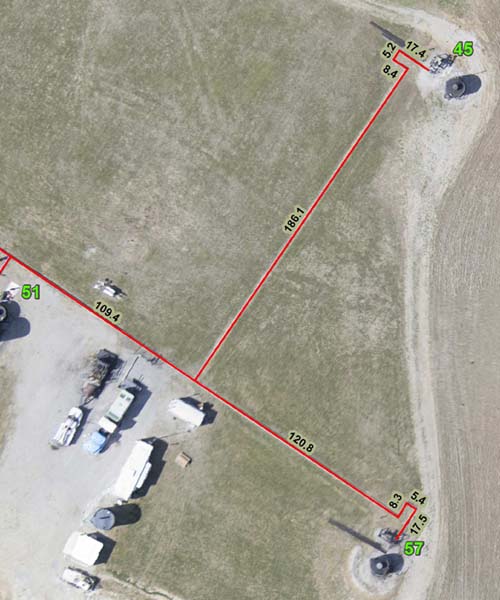 I-Map Data Systems can provide online display of developed photogrammetry products for private or public viewing on the Internet.   Site plans, boundary surveys, and engineering data may be included.   Map interfaces may be simple or highly developed with custom GIS functions including tools for measurement, map image capture, and vector digitizing,   A 3D model display may also be included in the map interface.

Click the image below to see an interactive map of a building site that includes an embedded 3D model.
The map well open in a new window.   See basic instrcutions below. 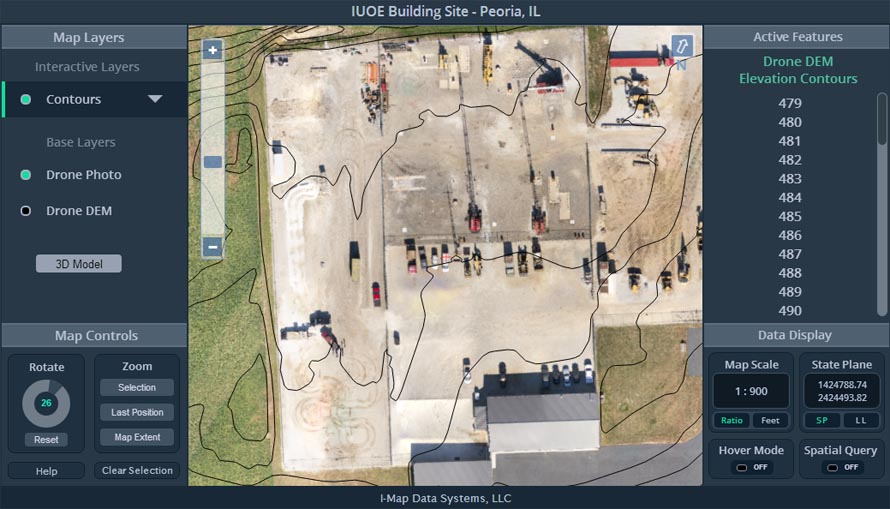 Use the mouse wheel to zoom in and out.
Click round layer indicators to turn layers on or off.
Click the contours or list elevations to identify the contours.

To view the 3D model separately on a cell phone or a computer, use the additional model link provided below.  For additional instructions on the map operation, contact Mark Phillips at 417-866-6400.

Applications for archeological site development and 3D modeling can be viewed on Bill Isenbeger's Sketchfab page at: bisenberger at Sketchfab.